How to succeed in pipe smoking without really trying.

Breaking in a briar pipe.

The gentle art of pipe smoking continues to be one of life’s rare pleasures. It can’t be hurried and the mere process of choosing a pipe from your rack, selecting the right tobacco to match your mood or time of day, carefully filling the bowl and lighting that first match has probably already lowered your pulse rate and calmed your blood pressure.

The act of smoking a pipe does not necessitate sitting back in a comfortable chair. A lot depends on the pipe you choose. A clay pipe or a long churchwarden is best enjoyed while relaxing or in conversation where the important issues of world affairs are being discussed in a measured and detached way. Talk of politics or ideology should be avoided when smoking a clay pipe, since the consequent tension and excitement may lead to you chomping down unknowingly on the end of your pipe, resulting in an explosion of clay shards in your mouth and an abrupt end to your train of thought. A strong amber stem attached to an impressive briar would be best under those circumstances, since it would imply a studied knowledge of the subject under discussion and if used to emphasize your point, may intimidate your opponent.

With a briar pipe, once lit, you can generally go about almost any business, be it mowing the lawn, writing a blog, taking a walk, or grilling a steak. An outdoor grill is great cover, since any ash that flies from your pipe onto the food could easily be dismissed as a smudge of charcoal.

The point I should be trying to make is that pipe smoking can be fun and easy. Unlike cigarette smoking, pipe smoking is more of a hobby than a habit. If you are trying to move off cigarettes, then a pipe is nice way to go.

I once worked for a man who gave up chain smoking cigarettes by taking up the cigar. He ended up chain smoking cigars, and not the pleasant premiums, but the smelly Phillies (nothing against the cigar named after my home town) which leave a horrendous stench in whatever confined space they may have been smoked. In the case of my old boss that would have been a driving-school car. The only good thing was it probably turned a lot of high school kids off to the idea of smoking anything after a lesson or two in the cigar mobile. If the old guy (who was probably younger at the time than I am now) had smoked a pipe, well, that would have been an entirely different story.

Where was I? Oh, right breaking in a briar pipe.

What’s up with breaking in? It’s not like you don’t have a key and you need to break into your briar pipe. No, breaking in is the process of preparing your pipe to successfully handle years of use. In order to truly enjoy pipe smoking, you want an experience that won’t leave your tongue begging for an ice pack, or a pipe with a charred out bowl that smolders for days like a New Jersey landfill.

The easiest way to accomplish this is to treat your pipe like a new puppy. You are going to sort of housebreak it, but gently. Even the pipes that have bowls with a nice dark carbonized interior should be broken in over a period of days. The pipe authority Richard Carlton Hacker suggests that with a briar pipe you should rub a very thin layer of honey on the inside of the bowl before you begin to fill it with tobacco and light it for the first time. And who knows what darkness lurks in the pipes of men (or women)? Hacker knows.

Generally, I break in my new briars, by filling the pipe about a third to half way full, tamp it down well, not so tight that you cannot easily draw through the stem, but firm. Light it and smoke it down to ash, but puffing slowly so that the pipe does not become too hot. The idea is to build up a thin carbon cake inside the bowl which will then protect the bowl from overheating. After a few half-bowls, and having let the pipe rest a day or at least a few hours between bowls, gradually increase the amount of tobacco and after a week or so you’ll have the cake you need to proceed. After that you can confidently fill your bowl and smoke happily ever after.

A clay pipe does not need a break in period, but they do tend to break anyway.

Next up: Filling and lighting the pipe and how to actually smoke the darn thing. 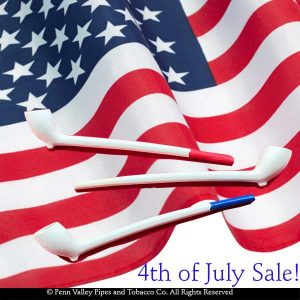 4th of July Sale – Use the coupon code BIG4TH when you checkout and save 10% on your entire order.