The Sherlock English Tavern Pipe is based on the style used in England in the 18th century when smoking tobacco was a popular pastime.

Our replica English tavern pipes are made in the U.S.A. and now come with a red varnished tip standard. You can also purchase this pipe without the varnished tip. Tip of the pipe is red varnish, or if you choose, a black varnish that can help prevent the dreaded “stick-to-your-lips” experience associated with plain clay.

Please note: When available you can choose the standard red tip, the all-white without varnish, or the same pipe with a black varnish. If a particular version is not available it will not show up in the drop-down below.

NOTE: The red-tipped and black-tipped pipes have a varnish applied to them so you do not want to check “add varnish to my pipe” on the checkout page. This would add an additional $2.00 to your order when you have already paid for the varnish. 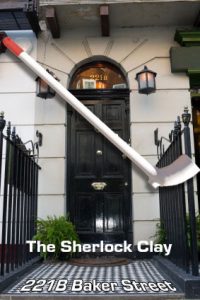 The English Tavern Pipe is based on the style used in England in the 18th century when smoking tobacco was a popular pastime.
The tavern pipe would often be available for free at Inns and local Public Houses where patrons would enjoy a smoke with their tankard of ale.

Sherlock Holmes sat silent for a few minutes with his finger tips still pressed together, his legs strtched out in front of him and his gaze directed upwards to the ceiling. Then he took down from the rack the old and oily clay pipe , which was to him as a counsellor, and, having it, he leaned back in his chair , with the thick blue cloud-wreaths spinning up from him, and a look of infinite languor in his face.
The Adventures of Sherlock Holmes: A Case of Identity

This classic 18th century tavern pipe will give you a cool, dry smoke.

Free shipping to Owego and Apalachin (Zip Codes 13827, 13732) with a minimum purchase of $20.00.
Outside the local area? We now offer economical First Class shipping on many items.

Please note: We are now including insurance and tracking on all Priority Mail orders. You can add insurance for First Class orders at checkout.

Free shipping on all domestic orders over $79.00!

Remember to check your cart. When your order reaches $79.00 we'll ship your order free. (US orders only). Does not apply to overnight orders. (May not apply if using other cart discounts) We now offer economical First Class shipping on many items.

We do not sell items to persons under the age of 18. This site does not sell tobacco or tobacco products.

If you are a pipe shop, smoke shop, cigar store, museum shop, sutler, fair vendor, or other enterprise and would like to offer hand-pressed Old German clay pipes to your customers, check out Old German Clay Pipes US. (You will need to create an account to order the pipes.)

For special discounts, new product announcements and more sign up for our emails.